Would You Buy a Comic Strip from This Man?

If I was gong to sell my services as a freelance cartoonist to such an obviously elegant periodical as International Justice Monthly, I would have to convince them of my talent, and that they could depend on me to crank out consistently topical and funny gay cartoons, month after justice-filled month. I wonder what I sent them to make my case. What was I drawing in 1980-1?

My (science fiction and comics) fan art at the time was mostly silly one panel gag cartoons. It
was a step down creatively from my work as contributor, editor, and publisher of Endeavor during my teen years -- but I've always drawn what the market demanded. What's a little frightening about this particular cartoon is how timeless it's turned out to be.

New to the gay community and Toledo in general, I got active in the Personal Rights Organization (PRO) of Toledo. I volunteered to do what I could, and that was draw cartoons for the newsletter. Most were social filler-- some took an activist bent. Still cautious about putting my real name in print as gay-identified --- Gay Comix #1 notwithstanding--I used a pseudonym. I signed my work "Al Heimstadt" -- using the original spelling of my mother's family name, and deriving "Al" from my middle name.
The one piece of artwork I probably sent the folks at International Justice Monthly was part or all of "Saboteur," my story in the first issue of Gay Comix, edited by Howard Cruse. Above all it showed that I could tell a story with pictures and a series of jokes leading up to a point.

I suspect graphic story telling technique was lost on IJM. They gave me a "no" of some sort -- I wonder if I still have their letter? And I think they put me onto the idea of self-syndication.

Note the walk-on character called "Murphy!" Any connection with the later comic strip just shows I had a "Murphy" stuck in my head for some reason. "Roger" draws his name from the most vitriolic homophobe at my place of employment. I felt he ought to have a queer character named after him. 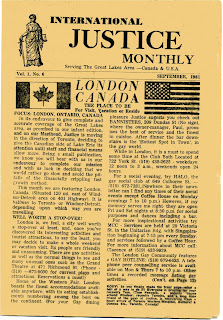 
Since this is my first blog post, nobody is listening yet -- I can say what I like and it doesn't matter if it’s interesting to anybody but me.

Murphy’s Manor, my gay comic strip, got started in response to a bar rag Jan Suter gave me. More about Jan later! He found a classified ad in this issue, and thought of me. What an opportunity to be published!


I wrote the International Justice Monthly – the name of the neatly letterpressed bar rag (a pig in a tux is still a swine). I don’t remember exactly what they said in reply to my letter. I probably sent samples of my SF/comic fan artwork. What they said generally was “no.”  With an excuse – perhaps that they were about to cease publication. It may have even been their suggestion that I self-syndicate, and perhaps they gave me  my first start of a mailing list of gay publications to sell my cartoons to. 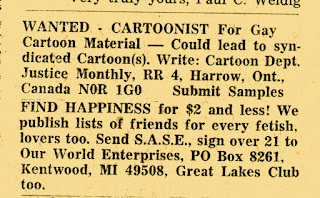 That's right! I fell for the old classified ad routine. But look where it led. That'll be the story of this blog.

Posted by kurt Erichsen at 4:52 AM No comments: