An important piece of producing Murphy’s Manor comic strips was keeping in enough subscribing newspapers on a continuous basis to make it worth my while. That I did, barely.

My sales technique changed a lot of the years. The first six Murf strips were mailed out to a published list of gay newspapers, along with a cover letter.

And here is the cover letter. Printed in blue ink on 20# white bond paper using my Gestetner 260 silkscreen mimeograph.

I didn’t get my first computer until 1984. The software and hardware of DOS were not useful in producing artwork for a number of years yet, nor had the Internet yet emerged. But it was sure a godsend for record keeping. The first letter was simple and contained typos. But later as I grew skilled with WordStar, SuperCalc, and dBase I generated sophisticated mailmerge solicitations complete with branching if() statements.

The first challenge in selling a comic strip was just getting somebody’s attention at the newspaper. Getting your letter opened without being thrown into the trash. Getting your email past spam filters and read. Never knowing what works best for any given newspaper, I sent my letter to the editor one year and the publisher the next. I sent paper letters by mail one year, and the next I used email, then paper again the next year.

Did it work? Well enough, yes. But I never hit upon a magic sales approach. 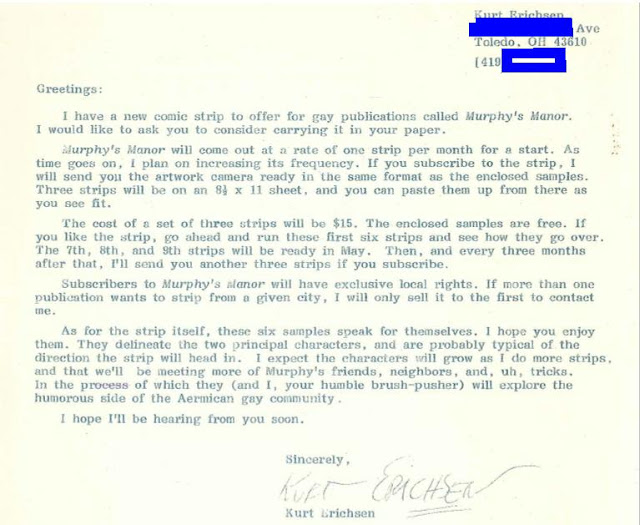 Posted by kurt Erichsen at 1:44 AM No comments:

Over the strip's life of 1981-2008 Murf ran in nearly 70 papers -- but usually 5 to 8 at any one time. Papers came and went. Some subscribed for only a few strips (and probably never paid for them) --- and then there was Miami's The Weekly News that printed 1036 strips. A word of gratitude goes out to editor Bill Watson, wherever he is now.
Here is a *pretty good* list of papers that carried Murf for more or for fewer strips -- and the number of strips for which they subscribed

But I digress. About Strip #6.

As swept up as I was with coming out, I never lost my cynicism. Some gay men were full of big talk about sex and which rest areas were hot. So I modestly suggested that a rest area would be a good place for the Gay Pride fund raiser. (Ohio Gay Resources Exchange = OGRE, get it? get it??)

There are 1,183 Murphy's Manor comic strips.

In addition there are 16 Murphy's Library comic strips that I drew for Lambda Rising Book Report.

Well, everybody? How much Murf are you up for? At the rate I'm going -- a couple strips a week, this could take, well, do the math. In that period you'll see the GLBT community change. Though I didn't set out to document sociological evolution, that's what I ended up doing. You'll also see my drawing skills oh so gradually improve.

Posted by kurt Erichsen at 11:44 PM No comments:

The first Murphy's Manor comic strip was drawn in November 1981. The last in September 2008. Murf continued in syndication until January 2014.

This strip established Jeff as the Eternal Party Boy, while we see Murf in #3 as rather bookish. Autobiographical, definitely. If I originally intended Murf and Jeff as the odd couple stars of the strip, it didn't turn out that way.


Of these first six strips, number one had to come first because Jeff moved in.  Number six I wanted last for reasons you will see.  The others played on the fundamental oil and water relationship of Jeff and Murf.  Until I got the basic gags down on paper that defined the characters and relationship, additional characters were not required.  Not quite yet.

Posted by kurt Erichsen at 2:26 AM No comments:

Look what I wrote about Murphy's Manor strip #3 in Facebook just last February. If IJM continued to pretend they could syndicate my strip, I'd forgotten. By February 1982 I'd gotten a mailing list of gay newspapers from some place. And it may have been from IJM:

The first six Murphy's Manor comic strips were drawn in November 1981 for a solicitation by "International Justice Monthly," a tabloid digest from Toronto. It took several months to conclude that IJM was not true to its word, and had no publication opportunity to offer.

But it struck me that there were other such papers all over the continent. All I needed was a mailing list -- somehow I scrounged one -- and I offered the cartoons for syndication the following spring. Initial response was great -- about 15 papers with a combined claimed circulation north of 100,000.

It wasn't that easy of course. A good half of those never got around to paying me. Throughout its run, Murphy's Manor would be plagued by deadbeat editors and publishers.
In this strip we get a laugh out of a sexually-transmitted malady. Then, only a nuisance. Laugh while you can! When you think about -- it's really kind of prophetic.

Posted by kurt Erichsen at 9:11 PM No comments:

The early Murphy's Manor comic strips mixed the joys of discovering sex -- when the worst that could happen was an inconvenient case of the clap -- with coming out when most gay men were still closeted.
Many of my characters were based to degrees on real people. The real Jeff -- I think that was his first name -- I only knew briefly. He was the hardcore party boy, and didn't stay put in Toledo long. And while Jeff Sorensen looks like Astérix, the original inspiration for Jeff was African American. Had he stayed in Toledo longer, Jeff S might have looked rather different.

Posted by kurt Erichsen at 1:14 AM No comments: 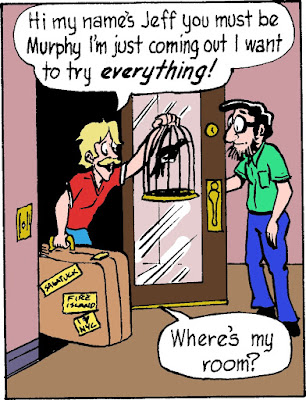 No Pressure Or Anything

Third post, time to get down to business.
Let me state upfront to my Facebook friends that I am going to rehash the materials you have already seen. I will expand on my comments of the Murphy's Manor strips where I think I can add something that will be of interest. I will digress into esoterica where I think I can get away with it. I will totally deviate from the Facebook narrative when I damn well feel like it.
And I hope you enjoy it. Ultimately i hope to get the Kompleat Murf online in a more accessible form.

Murf #1 was from a set of six demo strips I drew in response to a classified ad in International Justice Monthly a bar rag from Toronto that never did pick up the strip. After completing my demos I found a mailing list of GLBT local papers and sent out a mimeographed (yes, with my Gestetner 360!) cover letter offering 4 monthly strips for $15. Bill Watson of Miami's The Weekly News said great, but I've gotta have weekly cartoons. I gulped loudly and got to work.


The first six were signed "Al Heimstadt," because I was uncomfortable putting my real name on gay cartoons. At the last minute before initial distribution I re-thought it: hey, what am I hiding? It's not as if there's anything wrong with being gay. And isn't being *out* the point of this strip? I used my real name, and from there, there was no looking back.

The first strip set the stage for all that was to follow as Jeff the Eternal Party Boy met Murf, his new landlord/roommate.

If you really think about it, you could become quite intimidated drawing the first comic strip of a series, especially one that is going to run 1,183 strips.Think about it. That premiere strip must establish the pivotal characters. More than that the foundation for the humor of every strip to follow. Take this case. Murf is a "Mary Tyler Moore" character. A good-natured, mild observer more than an instigator of comedy. The other character is Jeff, the party boy. He doesn't worry too much about life's philosophical questions - he's just here for the fun. He represents the great mass of the gay community you saw in bars but never at meetings of the local gay rights activist organization.Take it as a hint that much of the satire in Murphy's Manor will be affectionately directed within the community, and not just at our foes.

Posted by kurt Erichsen at 11:45 PM No comments: